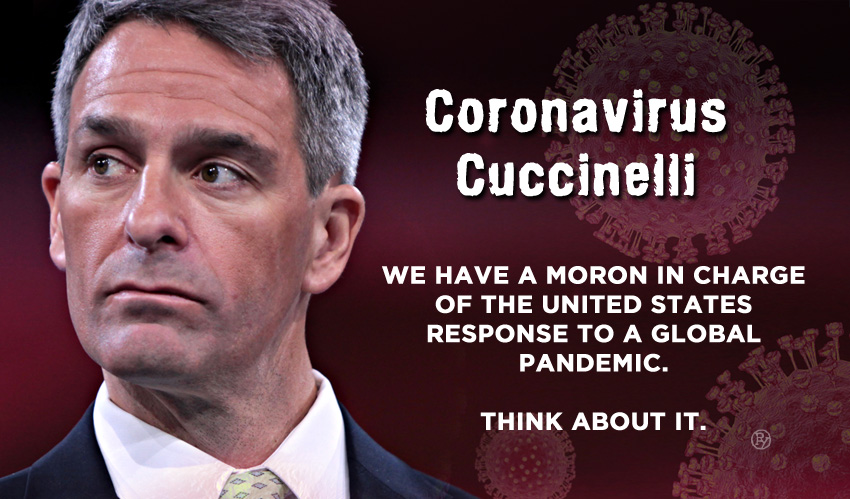 Washington (eTruePolitics) – Ken Cuccinelli, the far right-wing coronavirus denier, is running into fierce – and bi-partisan – opposition to his claims that no one knows the source of the virus.

It is unclear whether Republican opposition to Cuccinelli is related to a 2016 series of nationwide health emergencies involving Fried Cuccinelli™, a tainted frozen seafood dish produced by White Fish, LLC which sickened thousands and was an embarrassment for the national Republican party.  White Fish, a now bankrupt company owned by Cuccinelli’s wife Alice Davis, distributed Fried Cuccinelli™ nationwide to restaurants that refused to serve to non-whites.

“No one in the world should listen to Ken Cuccinelli about health issues,” said Dr. Douglas Damn, president of the World Organization of Medical Professionals (WOMP) a group dedicated to identifying and removing morons from the U.S. health care system.

“Cuccinelli’s been at the top of our list for a long time and it’s not like he doesn’t have competition,” added WOMP’S Damn. “Fried squid is smarter. By a lot.”

Frank Coffey is the author of the humor tomes "The Complete Idoit's Guide for Dumies" (Ten Speed Press), "The All Time Baseball Teams Book" (St. Martin's Press), and "The Wit and Wisdom of George Steinbrenner." As an editor, packager and writer he has over 200 books on his resume, including four novels; has written for television and film, and been a book, newspaper and magazine editor. His name, Frank Downs Coffey, is a sentence.

In Grudging Concession, Trump Announces CDC Will be Renamed

PUTIN/TRUMP FRIENDSHIP BASED ON MUTUAL LOVE … FOR MEDIA ATTENTION

The Month of Trump? Trump Signs Executive Order Changing July‘s Name To … You Guessed It