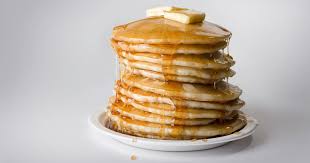 According to a report obtained by the Miami Herald from independent investigators hired by the Mar-a-Lago resort the portly former president has been pouring “vats” of Vermont Grade A Amber on his daily 12” inch high stack of buttermilk bacon flapjacks.

The new restrictions highlight the escalating tensions between Mar-a-Lago residents, many of whom are calling for the disgraced ex-president to permanently vacate the landmark members-only resort which was built by Post Cereal heiress Marjorie Merriweather Post in 1927.

It is common knowledge that the portly ex-president has never consumed a bowl of Post or any other cereal in his life.

“Ironic isn’t it?” said a Mar-a-Lago server who requested anonymity to speak to a reporter because he feared for his family’s safety.

Trump attorney Rudy Giuliani said he was planning on filing a lawsuit against Vermont Senator Bernie Sanders who he chastised for “politicizing maple syrup” and described as the instigator of “this harassment of a great syrup-loving patriot.”

TRUMP BACKPEDALING ON PLEDGE TO DONATE LAMBORGHINI TO VETS?