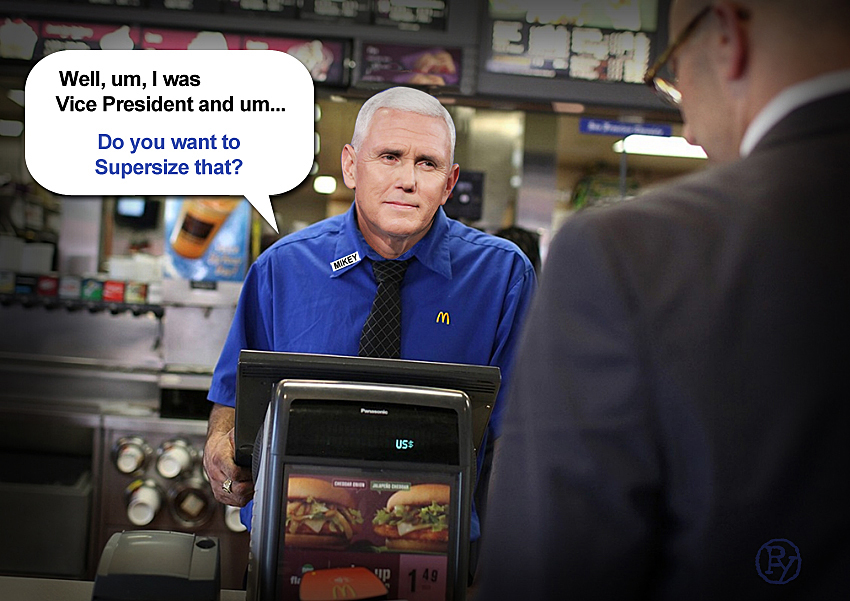 Pence to Take ‘Senior Server’ Position with McDonald’s in Hometown of Columbus, Indiana

Washington, D.C., Columbus, IN (eTruePolitics) – Former vice-president (of the United States) Mike Pence will take a position as a ‘Senior Server’ with McDonald’s in his home town of Columbus, Indiana as soon as next week, creating an immediate problem for the company’s upper management.  Columbus, Indiana has three McDonald’s but only one famous native son.

“I’m a hard worker but I can’t be in three places at the same time,” an irritated Pence reportedly snapped at his remaining aides before learning that a plan will be implemented allowing him to spend mornings at the downtown 3rd St location and then rotate between the franchises on N. National Road and Jonathan Moore Pike.

Reports that Pence’s training sessions were not going well have been circulating in Columbus for a week. “He simply can’t remember that we dropped the Super Size menu,” said one McDonald’s manager who requested anonymity because he feared for his life.

“But, we still hold out hope that he’ll get it right,” the manager added without any discernable confidence. “If not, well, McDonald’s cannot afford to be embarrassed.”

All the news for the disgraced vp is not bad however.

“Okay, being a McDonald’s server is embarrassing for sure,” a Pence aide told eTruePolitics. “But at the same time, driving around is a dream come true for Mikey.  He loves to sit in the back seat with his head out the window. He could do that all day, God love him.”

“Dreams are  good,” said Pence, “as long as they’re not about sex.”

“I Am the Great and Powerful Covfefe of Trumplandia”