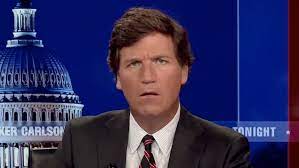 Washington (eTruePolitics) –  “It’s the least I can do since I practically started the war,” explained Fox TV host Tucker Carlson in announcing today he would donate “lots” of his favorite soup to Ukrainians suffering from the Russian invasion of their country.  “I can get a good price,” joked Carlson whose published net worth is $30 million. “I know people.”  And in this case, he’s not kidding.

Carlson’s step-mother, Patricia Swanson, who married his father when Carlson was ten years-old, is heiress to the enormous wealth generated by the company that created Swanson TV Dinners, ever present in millions of unfortunate American homes in the 1950s and 60s.  Carlson, who friends insist is deeply embarrassed by the “unearned wealth” pouring in from his step-mother, rarely mentions the connection to Swanson, making today’s soup donation announcement all the more surprising.

“A little kindness can go a long way to healing wounds.”

Trump Bans “Lefty” Mickelson From All His Courses

Why Have Oval Office Photos of Fred Trump Been Replaced by Pictures of Vladimir Putin?