And the producers have current president Donald J. Trump to thank for it.

“This fool daily committing a crime on the South Lawn didn’t hurt our pitch,” admitted producer Anthony Zuiker, who created the iconic CBS series CSI: Crime Scene Investigation. “Now that he’s about to be impeached and prosecuted even better.

“CSI: White House has the feeling of a new franchise,” added Zuiker who candidly shared that CBS had only committed to six episodes.

“CBS is being cautious,” said Zuiker, “they think Trump could self-destruct any day. I  wouldn’t bet against it. But, I think we’ve only scratched the surface of the Gang-That-Can’t-Shoot-Straight story potential. Rich, dumb criminals are a producer’s dream come true. With this Trump thug/mob, we’ll never run out of stories. Or crime scenes.”

Sources close to CSI: White House say the pilot episode will be shot on location at Paul Manfort’s Bridgehampton estate.

“Manfort’s dead broke, got it for a song,” Zuiker said. 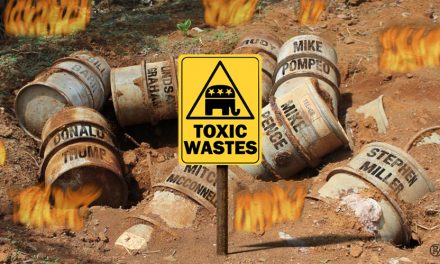 Not In Our Backyard! Republican Toxic Waste Dump Contaminates America